Doesn't that just sound like a filler? I mean, it's like I don't know what to say so I'm going to end the sentence with "fun stuff." I'm talking with Man B right now...HELP! This is a very slow conversation. I believe I mentioned that he has 2 kids, right? He just asked me if I wanted more than 3 kids (which is what my online profile says), and if that was just my own kids, or including others. We just decided what we're doing tomorrow (get me out of it!) and I'm not excited! Pei Wei and then bowling. We aren't even starting this thing 'til 8 and I'm not staying out all night! And now he's fishing for what I'm doing this weekend... Advice? Help? I want to cry...
at 8:31 PM 7 comments:

Alright, this is a blog/journal entry, a little extra insight about me and actually, the name of my blog fits this post very well. Heads up, I'm not the hottest thing on the block, despite what it mays sound like in the proceeding ramblings. I've taken to the wonderful world of internet dating, woo hoo!!! So that should explain the number of males in the story.

First a little back story. I went out with a man in February for, oh three weeks or so. Not exclusively, but consistently. I had thought we really hit it off, there was fun conversation, chemistry. I liked him, which is naturally why I'm sure I weirded him out and at the end of the month he called me to let me know that he had just recently started seeing someone seriously (or that decision had been made) and we probably shouldn't go out anymore. I was bummed, but I gave him points for actually letting me know. We'll call him Man A.

In the first part of April, I started talking to another man who is really, really nice. He seems to really like me, we've gone out once and I am trying to find ways to limit the amount of texts he sends me (seriously, it only takes a minute or two to get a response). We're supposed to go out again on Wednesday. We'll call him Man B.

So two weeks ago, or there about, I get a text from Man A, just to see how I'm doing. I responded, but I was really going to try to not get psycho over it and read too much into it. Friday, I get an invitation, via text, to go to his house for an impromptu barbecue. Sure, why not I say. There was one other girl there by the time I got there... So that chick leaves and Man A and I start filling each other in on the last few months. Chemistry is still totally there. I ask at one point about the girl he was seeing and he mentions that they are breaking up. (Is it bad that that information made my day?) Anyways, I leave and I get a text the next day asking how my day was (from Man A, I got numerous texts from Man B). I answered and left it at that. The next night I get a phone call, lasted about 7 minutes. He says: How are you? What did you do today? By the way I'm officially single. What are your plans for the week? I say: How are you? How was your day? Well, that's good if that's what you were wanting. What are your plans for the week. He told me how busy he was, I said have a good week and we hung up.

The thing is, I really, really like Man A. I'd ditch Man B for Man A, at this point in time, in a heartbeat. Problem is, I don't have a clue about what Man A wants from me, if anything at all. Man B is coming on really strong (I see now why guys have run from me in the past) and it's a little overwhelming, as is the fact that he is 26, divorced and a dad of two small children...

Okay, the real dilemma is this: I'd love to ditch Man B at this point, and just sit and pine over Man A, you know, waiting for him to call. But when I actually say those words I see how stupid it is to pass up what could be a good opportunity because I want something else. Know what I mean? This isn't really all the details, but the jist and any rate. Feel free to give advice, comment, question, laugh, or whatever, it's just something that I had to get off my mind...

P.S. I haven't mentioned Man C, the 36 year old, separated-not-divorced-yet, dad of two who really wants to meet up with me and is pulling the same clingy behaviors as Man B...

P.P.S Sorry Aud, I know this is the kind of stuff reserved for our dinners, but I just couldn't hold it in. Oregano's soon?
at 8:41 PM 9 comments:

Just a side note, there have been many-a-blog that I've spent my hard-to-come-by time writing (go me with all the hyphens!) that have failed to publish. I got so friggin' tired of trying to re-write (hyphen!) all my witty blogs that I've decided Ctrl C adn Ctrl P are my new best friends. I really think this relationship is going to take me places. ;)
at 9:09 PM 2 comments:

I forgot to put my apple necklace on today (no, not a "Twilight" apple necklace-someone actually asked me if that's what it was). I'm only saying this because I was thinking about how I had no jewelry on as I left my house this morning. Anyways, I got to school and went to talk to another teacher who had "kennel" duty and one of my boys runs up to me with a pair of earrings. "Miss Rigby, these are for you!" I look at the earrings and they are sparkly, pink plastic earrings that dangle, a little bigger than a quarter. He was so absolutely thrilled to give me these earrings. I put them on as soon as I was inside and wore them all day long. (This is the same boy who got my my princess gems for Christmas, look in the archives if you didn't see that picture). Even got a few compliments from some of my girls on my stylin' earrings. The best part is, I now have a really great pair of "date night!" earrings. Watch out boys!
In all seriousness, I was touched at how this little kid had thought of me when he saw the earrings and wanted to give them to me. Best gift I've ever gotten from a male not in my blood lines, HANDS DOWN! 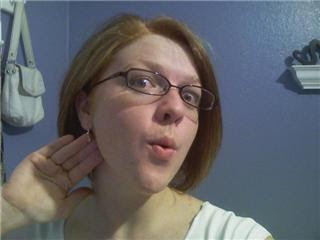 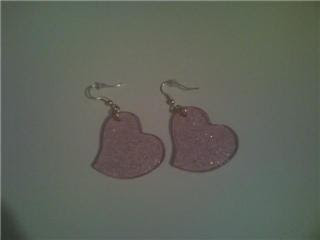 Book worm to the extreme

I wanted to share that since my Spring Break, which started on March 10th, I've read 7, wait, make that 10 books. I'm not talking about children's books, the shortest one had 357 pages. Doing the math, that's about 1 book every 5 days. Mind you, 5 of these books I've read since I've been back in school. I'm a total nerd aren't I? I'm not going to tell you which books I've read, only my family gets the luxury of knowing that little secret. Still though, how cool am I?
at 7:24 PM 5 comments:

On a whim, I googled my name and do you know what popped up? My dear friend Audrey's post on her blog about our daycation (I swear we're going to have one Auds!!!). I was a little creeped out that someone could look me up and be able to read my thoughts, okay, those were Audrey's, but still my link is on her blog. Long story short: I think I may make this beauty private. It's not for sure, but what if this got into the wrong hands? I'm not sure I know whose hands are the wrong ones, maybe that's why I'm hesitating. Just wanted to let you all know, just in case. :)
at 7:21 PM No comments:

Our school just had our annual Spring Fling! It's our huge fund-raiser that involves the entire school and community. Each teacher (about 30) creates a classroom booth which is a game and everyone who plays gets a prize. On top of that we have a silent auction with themed baskets and "time with your teacher" (which is so fun). Last year we raised over $20000 and this year was much bigger, all our hard work paid off! So here is a picture of my AMAZING booth, which wouldn't have been so AMAZING if it hadn't been made mostly by my wonderful family (thank you Mar and Luvey!). 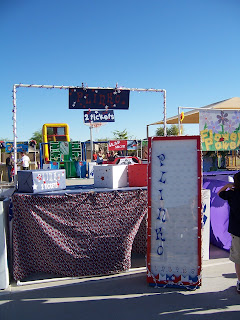 In addition to the class booths, the most fun of teachers (which includes me, of course) place themselves as targets in the pie-throwing booth and dunk tank. 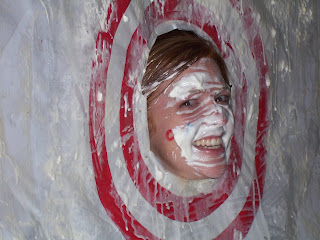 Alright, so the pie booth isn't so bad as long as your eyes aren't open when the pie comes at your face AND if they don't angle the plate upward so you get cream up the nose AND if you don't mind the smell of fermenting whipped cream in your hair for 24 hours. Really though, a lot of fun watching how excited they all got each time the pie hit my face... 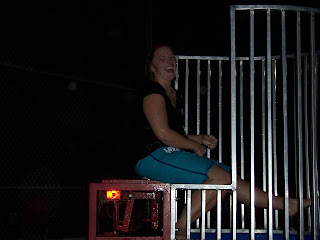 The dunk tank, well, it's a booty work out. I don't have the longest legs (I know you're shocked to hear that) so climbing up and down isn't as easy as you'd think. This also took place at about 8:30, you can imagine the desert with no sun right? Still the kids thought it was a friggin' hoot watching me hit the water and were so excited to hit the target (with a ball or their hand). 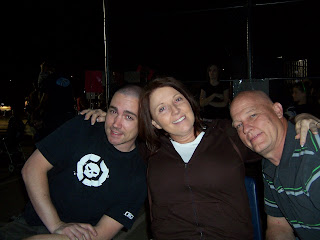 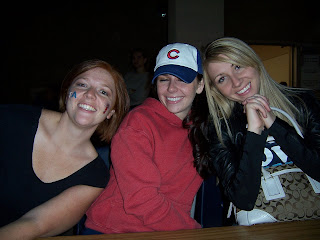 Thank you to my supportive and adoring family for trekking out to Chandler for the big shin dig. Aren't they great?!?!