Yeah, Katie's life? Not so interesting.

I know it's been awhile since I've posted, but I promise there is nothing interesting going on. Honest and truly. So, I've decided that in order to appease my fans (ha ha ha, fans...) I'm going to do a completely random post (as random is what I do best, heheheh).

So I have a total crush on an AFL player (Arena Football Leage). I'm not going to mention his name or what team he plays on (if you talk much to me during the season you know the answer to both of these questions) as I know his sister-in-law has a blog, and if I can find her than she can find me. Anyways, he's phenomenally hot; like, really, really, ridiculously good looking. My baby sister has mad hook-ups at United Airways Arena and got tickets to an AFL game this summer (box tickets, which are totally overrated, by-the-way), so we grabbed some friends and went. If you've never been to an AFL game you are seriously missing out, the weirdos come out of the woodwork for these. Case-in-point: 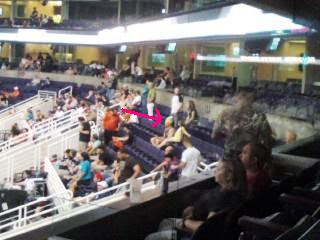 You can't see it well, it's a shame I have a crappy camera phone, but this man is wearing a popcorn bucket as a hat, for the entire game. $20 on popcorn is just too much, but if I use the bucket as a hat... 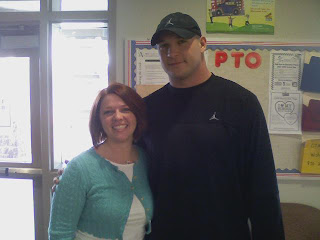 Yeah, that's Brian Urlacher. As in linebacker for the Chicago Bears, number 54. I don't feel right saying how I know him, but after seeing him numerous times over the last few years, I finally asked for a picture. Here's how our conversation went:
Me: Would you mind taking a picture with me?
54: No problem
Me: My sister and stepdad are such big fans.
54: You're not a fan?
Me: Uh, well, uh, well (face turning red), yeah, of course.
I have decided after examining this picture that I need to find myself a linebacker to marry. Do you see how little I look standing next to him? I was 10-15 pounds heavier then than I am now, too. He's massive.

Coming soon:
Parent-Teacher, probably have some bloggable moments
Utah visit, oh yeah, I'll have some stories
Vegas, well, maybe I won't talk about that too much. What happens in Vegas...
at 9:15 PM

So...does this imply that you've already been to Utah or that you're going to be coming to Utah? I hope it's the last one so we could get together! Let me know!

I think that I remember you talking about an AFL player when I was teaching with you. Or am I remembering wrong? Is this the same guy?

Oh Katie...I'm a total fan! It's good to read something new on your blog:).

Yea for linebackers! One of the things I love about Jayson is his size. Next to him I'm small, or at least smaller than I'd look next to a musician.

And you should totally name this AFL crush. You WANT his sister to find you and then you can become bloggin buddies with her and she can set you guys up! See...it's perfect! So who is it?

Katie your blog and your comments always leave a smile on my face. First I don't know if it is a girl or boy I am only 7 1/2 weeks and very very sick! Anyway You look great with or with out a linebacker, but I have to say it is fun having a big guy around, Rand is not a linebacker, but he makes me feel small. I have not rsvp d for the cousins thing but yes I want to to go.

Yeah, Katies life.... very interesting!!! You have a way with words! I can't wait to see you!!! I really wish you guys were just coming to my house to stay for a week! You should do that sometime!!!